Natasha is excited to travel to Israel to participate in a trip encouraging young diaspora Jews to immigrate there. When she manages to catch the attention of Shlomi, a handsome combat soldier, things turn ugly.

I chat with Inbar about the film and how it explores the reasons some people may have for following their ‘Birthright’ and how the state of Israel offers citizenship to those who may be able to claim it through ancestry, but don’t consider themselves to be Jewish. 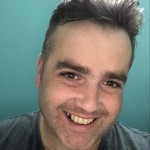